The Palazzo in the years

Whoever from the Spanish Steps goes towards St. Peter, walking through to Via Condotti, passes by the side of Palazzo Borghese.
The southern facade, which has an austere architectural composition composed by seven spans with a large door in the centre and a high frieze, dates back to the 1560s in the drawings of Martino Longhi il Vecchio inspired by Vignola.
Started upon order of Monsignor del Giglio, whose emblem is still visible in the courtyard, the building is still incomplete when Cardinal Pedro Deza replaces him in 1586. At his death, in 1591, the building became property of Cardinal Camillo Borghese in 1605 on the eve of his accession to the papal throne. 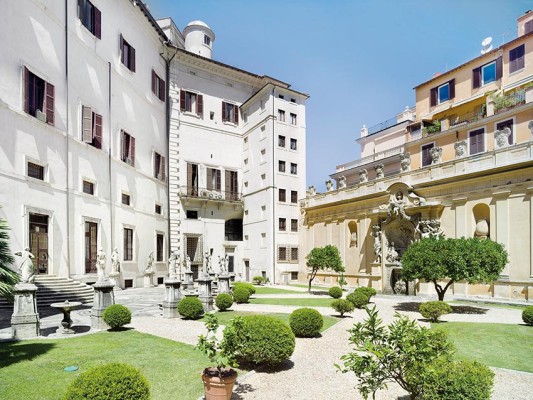 Thanks to a generous funding, Flaminio Ponzio completes the project and ends the construction. He decides on the new extended shape of the building that stretches out towards the river, beyond the area occupied by the square-shaped courtyard which is enriched by forty-eight ancient columns and three large statues.
The availability of the client and the talent of the great architect allow for the development of the building towards the Tiber, with the creation of the Ripetta wing which contains the roof garden, that proves to be an excellent way of protect the big inner Nymphaeum, decorated with statues and three fountains completed at a century later.

On the ground floor of the Ripetta wing a series of richly decorated rooms is created for Cardinal Scipione’s wonderful art colletion, which is subsequently transferred to the new Villa Borghese Gallery and then once again partially and forcibly moved to the Louvre Museum. The rooms for the large family, which were on the noble floors during summer and on the mezzanine in wintertime, were enriched with fresco painted ceilings commissioned to the best artists of the time. At the death of Flaminio Ponzio in 1613, most of the building was completed.
Carlo Rainaldi will then refine the roof garden and enrich Piazza Borghese’s facede with a magnificent portal on which stands the Borghese corps emblem, chiselled during the French Revolution years.

Following the end of Paul V’s pontificate in 1633, his nephew Scipione Borghese will take on the responsibility of completing his work, taking care of the building and of the immense number of properties around Rome.
In 1700 Marcantonio, brother of Cardinal Scipione, kept Palazzo Borghese’s reputation high, and the Palace soon became a mandatory place to visit for the upper-class men during their “Grand Tour” trip around Europe.
Marcatonio also commissioned to the artists who were already working on Casino of Villa Borgese (such as Gaspar Duguet, Caccianiga and Costantini) new decorations for the halls of the Gallery on the ground floor facing Ripetta.
The inauguration of the new headquarters of the Hunt Club in the halls of the first floor and the assignment of the Ripetta wing to the Embassy of Spain dates back to the 1920s.

The Palace regains its original splendour during the second half of the past century thanks to a series of renovation works of the building and the interior decorations. In 1960 the walls on the corner of Piazza Borghese are made more stable, in 1987 the entire length of the grand cornice is renovated and in 1997 the inner courtyard and nymphaeum are renewed, uncovering ancient stucco decorations and renovating fountains (awarded with Sotheby’s prize for the best restoration).

The spaces of the gallery

In the wing of Palazzo Borghese that stretches towards the river Tiber giving to the building the unusual shape of a cymbal, on the ground floor there is a gallery which consists of five adjoining rooms, with fresco ceilings, overlooking the nymphaeum. From the entrance of the building on Largo della Fontanella di Borghese, the view of the magnificent fountains made by Rainaldi and of the hedges encourages to uncover the peace of the garden and leads to the entrance of the gallery.
A staircase leads to the spacious rooms, all with very high ceilings and a rich golden cornice that frame the painted walls, which immediately recall the “Grand Tour” era, during which the same rooms hosted visitors from all over Europe. 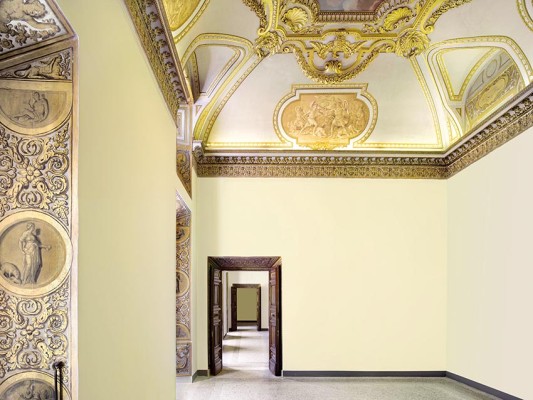 During that period, around 1770, Marcantonio IV Borghese, who was the head of the household and was very ambitious and wealthy, wanted to regain the importance and fame that the Borghese family had during the time of Paul V and his nephew Cardinal Scipione. In less than a hundred years, the Borghese family became one of the most important families of the Roman aristocracy and the rooms of the ground floor overlooking the garden a mandatory place to visit for travellers, who were welcomed in the gallery to admire the art collection, the sculptures and the paintings. The decoration of the rooms was done between 1767 and 1775 and, at the time, represented one of the most important decorative work in Rome of the late eighteenth, being commissioned to the most appreciated artists. 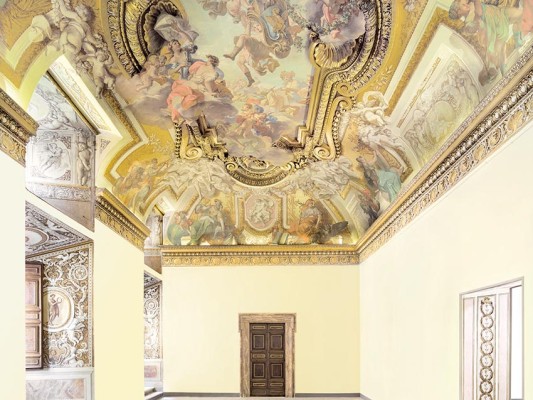 In the first room, on the ceiling there is Francesco Caccianiga’s painting Aurora, which was a common theme in the aristocratic buildings, which depicts the goddess while spreading flowers in the first light of day; moving on to the princess’ antechamber, there are neoclassical decoration done by Laurent Pécheux, in which in the center there is Le nozze tra Cupido e Psiche (1774) and on the side panels cards the wedding scenes with Jupiter, Mercury and the four elements.
On Piazza Borghese’s side there is the room which once served as prince Marcantonio IV’s antechamber that holds Ermenegildo Costantini and Pietro Rotati’s painting Ebe rapita dal Tempo (1769-70). From this room you then enter the Audience Hall, the largest and most outstanding room of the gallery, whose vault is decorated with Ermenegildo Costantini’s painting Il Trionfo dei Borghese e delle Arti (1773-74), which has been addressed by critique as “the final rumble of the Roman Baroque”. The family emblem is depicted as if it were in Heaven and crowned in a triumph of putti, amongst the Arts – sculpture, architecture, painting and music – and the Sciences, depicted by the side with a magnificence of colours and gold decorations.
In the last room, which points towards north, there is the Riconciliazione di Venere e Minerva painted by Pietro Angeletti (1773-1775) surrounded by monochrome panels depicting scenes from the Trojan War.